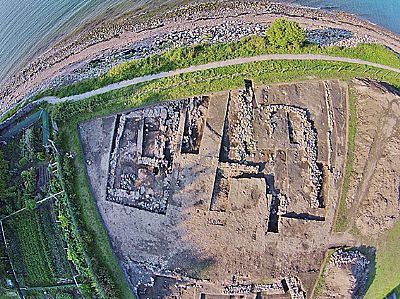 The 2014 excavations confirm the importance of this dig for understanding Cromarty's medieval development and how it compares to other east coast burghs.  It also proved a fantastic community event with over 140 individual volunteers taking part over the 23 day period, with at least five hundred visitors coming to the site for tours.

Volunteers of all ages took part in excavating, sieving, finds processing, site recording and a variety of training. We had four specialists visit the site during working hours to provide group training on animal bone, glass, ceramics and stone tool identification, specifically to do with the medieval and post-medieval periods. We also held one evening community talk on glass artefacts in Scotland.

You can get a flavour of some of the activities and finds from the 2014 season, from this video slideshow.

The results of the 2014 excavations are improving our understanding of the Burgh of Cromarty including the layout and development of the buildings along each side of Thief's Row.

On the north side of Thief's Row the remains of the three buildings shown on the 1880 Ordnance Survey map were found to overlie the remains of at least three earlier structures, with associated vennels and boundary walls. Ceramics of 14th to 15th century date were found associated with these structures. One of these structures had been re-used during the 16th to early 18th centuries and the thickness of the clay-bonded walls could suggest it was at least a two-storey high building – possibly even a merchant's house.

On the south side of Thief's Row, uncovered extensive structures and their associated occupation deposits of medieval date (14th to 15th centuries), including stone buildings and more ephemeral wattle and daub structures, along with their associated boundary gullies, vennels and possible evidence for small-scale smithing, which will be investigated further in 2015. These areas of settlement and activity were abandoned relatively early in the history of the burgh, the structures being landscaped over with spreads of ash, fish bone, animal bone and shellfish middens that were most likely generated from activities taking place on the north side of Thief's Row and along the High Street to the west.  In the latter stage of the 18th century, the south side of the road was then given over to small garden plots and eventually more open fields. 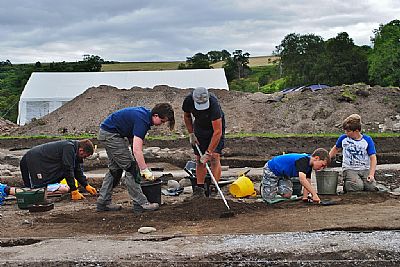 The artefacts and environmental samples are also contributing significantly to the growing body of evidence about the economic activities in the town. Ceramics analysis by Derek Hall and George Haggerty has confirmed several major phases of activity, while their analysis so far has identified the following ceramic groups:

The medieval material would appear to be tightly dated to the 13th/14th centuries although some of the Redwares may have been used in later periods. 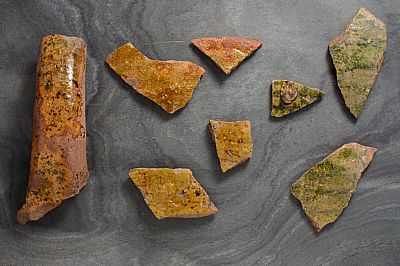 Of particular interest on the site is the growing evidence for a fishing economy in the Burgh of Cromarty based primarily on Cod. This fits in with evidence recovered from other East Coast burghs from Scotland into England. Along with the fish bones and shellfish remains (bait middens) we have found a growing number of iron fish hooks and a significant number of stone discs, which may have been used as net sinkers- the stones fitted into pockets within the nets as they were cast over the side of the boats. However, further research is required to provide a definite function for these enigmatic objects.

Other significant finds associated with the medieval structures of 14th to 15th century date are a growing number of rotary querns including complete and fragmentary examples that have been incorporated into house walls and areas of paving. We cannot be certain at the present time what the deposition of the querns signifies, whether the re-use of available stone resources, or a more symbolic incorporation of the objects into the fabric of the buildings – a practice that has been identified especially during the later prehistoric periods in Scotland and elsewhere in the United Kingdom and Europe. 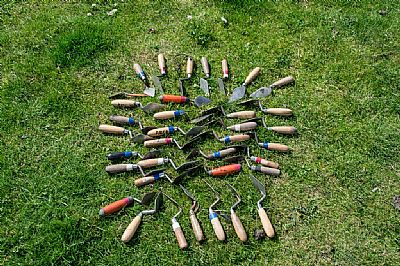 The excavations within the Reed's Park field continue to produce some spectacular results with regards to the settlement and economy of a small Scottish Burgh, and we look forward to increasing our knowledge in this respect during our planned excavations in the summer of 2015. 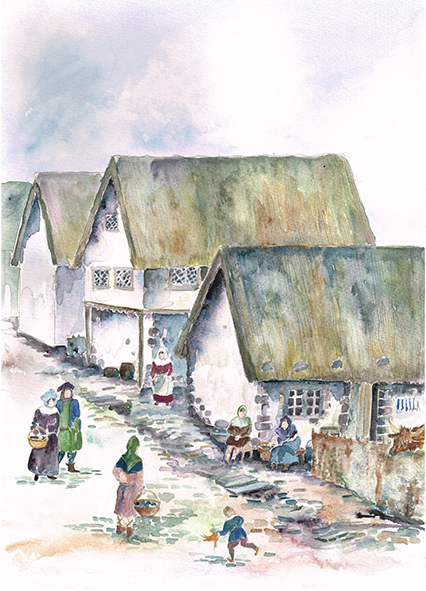 The artist's impression of what medieval Thief's Row might have looked like after the 2014 dig - larger multi-storey buildings aligned gable ends onto the street, and perhaps a more prosperous town?  (Illus by Pat Haynes, project volunteer)